Over 40 years and got rich by sticking toothpick profession
For a long time, the people of Vietnam have seen something burn incense on the altar of the ancestors is a traditional cultural beauty indispensable in the death anniversary award occasions, holidays. It appears then that the demand for flavor and produce the villages specialize in producing incense. For a finished incense, requires a lot of different materials. In that material, toothpick legs used as incense is a very important material.
Career as a toothpick comes to taste, it must include Quang Phu Cau (Ung Hoa, Ha Noi) as this is the traditional village longstanding (40 years ago) and still developing today.
In recent years, the village thrive, create jobs for many households in the village and gradually spreads to the neighboring commune. Many people know the dark flavor of Quang Phu Cau village, by Ung Hoa District, the village is not only beautiful in design, but also convenient for consumers. 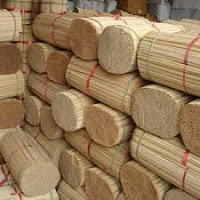 Currently, the maker of flavored toothpicks, Quang Phu Cau also combined toothpick kinds of circles, dark curtains ... the raw material to produce a variety of products and other handicrafts are exported to many countries.
The commune has 300 households and the households are involved in the different stages of the process of making flavored toothpicks. Of these, 60 households investment round toothpick making machinery exports to Canada, 20 households trucks supplying raw materials and cargo to the South.
Each day, Quang Phu Cau consumes about 200 tons of cane from Lang Son, Bac Kan, Thai Nguyen, Thanh Hoa ... move on. Many families from this small production space expand investment scale machinery, factory expansion to create jobs for thousands of workers locally, reducing the number of poor commune to 4% under the new criteria.
Challenges to traditional conservation not eroded

Quang Phu Cau faces many challenges in making career development toothpick into a sustainable brand. Flavored toothpicks communal majority is just raw products, to bring to the South to continue processing, then exchange is emerging. Farmers also no investment in machinery condition and level of use of modern equipment of the people is limited. Investment issues of human and material lack of government attention.
Go along with the economic development is still subject of environmental pollution. With traditions are fragmented, no waste treatment systems professional, the environmental pollution is the inevitable problem. Stage soaked bamboo of the people in the village have been doing water in ponds, streams and rivers polluted Threshold. Also, people still faced by the mill dust into the atmosphere toothpick. The sun spilled toothpicks handcrafted sugar also causes traffic jams.
He NVV- all round toothpick manufacturing facility, said: "Production of most all-round toothpick dry cork dust and so very very hard. Toothpicks are profitable profession but also many risks that, in the dry season, toothpick easily catches fire, causing fires workshop. But fire does not cause damage to people, but about money, it does not tell the full loss. "
Besides, the resource being depleted. The local people have to Laos, or Vietnam border regions - Central to exploit bamboo, cane as raw material for production. However, if only such operators certainly does not guarantee the sustainable development.
Looking forward to more foresight

To cope with the problem of environmental pollution, Quang Phu Cau CPC has built water project 2000-2010. In 2009, groundwater treatment plant clue Phu Luong Ha village was completed. After successfully Phu Luong Ha village, Cau Bau Village People, Dao Tu, hand soap Bridge also built water treatment plants. Until now, Quang Phu Cau has 4 underground water treatment plant, with a capacity of 200-500m3 / day.
Along with the water treatment plant communes disposal humus, but power plants are small and can not meet the needs of the people. To solved this problem, people had collected and sold to paper factories.
Dark flavor of traditional occupations were open to development Quang Phu Cau a promising new direction, with the continuous efforts of the government and the people in the village, the village believed that the Sun will become a - focal point of the rural cottage outside Hanoi.