January 16, 2019
(VOVWORLD) - Located 40km from the center of Hanoi, Cao Thon village in Bao Khe commune, Hưng Yên province, is among the largest incense-making villages in Vietnam. Cao Thon incense is widely popular for its special fragrance and has been exported to several countries. 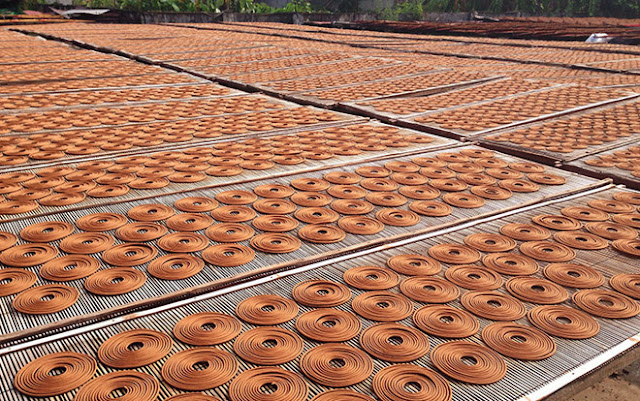 Incense coils is one of Cao Thon’s typical products (Photo: Ngoc Anh /Toquoc.vn)
On the left bank of the Red River, Cao Thon village, originally known as Thon Cao, is considered the cradle of incense making. According to local elders, Ms. Dao Thi Khuong, a Cao Thon native, was the craft’s progenitor and is currently worshipped at the village’s Dao clan house.
Nguyen Nhu Khanh, Deputy President of the Cao Thon Craft Village Association, said: "Our musk incense craft began in the late 18th century. For 300 years, the craft has been handed down from generation to generation.Each year on the progenitor’s death anniversary, the 22nd of the 8th lunar month, villagers gather at the house of worship to remember the person who introduced the craft to Cao Thon village, which provided a livelihood for villagers." 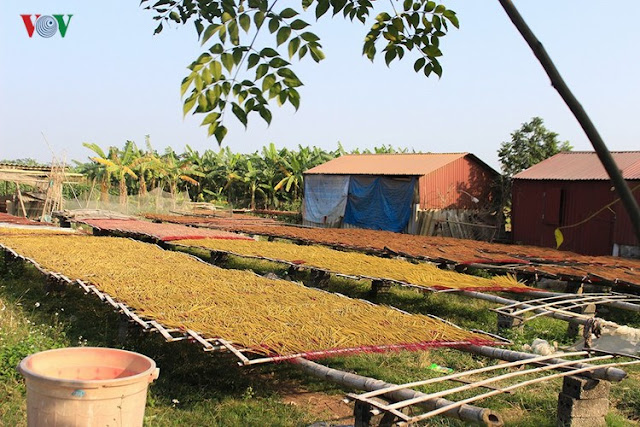 Cao Thon’s musk incense has a unique fragrance that no villages across Vietnam can reproduce or copy. It’s said that the incense powder is a mixture of oriental herbs.
According to Khanh, "All materials are purchased from border provinces. The 36 varieties of medicinal herbs include liquorice, cardamon, and tan beans. We use traditional recipes and, like herbalists, we balance the scents.  Different workers mix slightly different herbs to produce different scents."
Cao Thon villagers believe that the 36 varieties of Chinese medicinal herbs constitute the core of the products they have preserved for hundreds of years. Khanh says the recipes can’t be revealed to non-clan people.
"We teach non-clan people how to make incense but we never reveal the recipes. Only sons and their wives are given the recipes. Daughters-in-law must be at least 50 years old to know the recipes," Khanh said.
Each household in Cao Thon has its own recipes. Cao Thon villagers produce incense coils, incense sticks, and black cinnamon incense.
The year-round craft employs 600 workers in the village and nearby areas. The village produces about 10 million sticks of incense per year.
More than three-fourths of the 200 households in Cao Thon are engaged in the craft. They are constantly improving product quality and promoting their products more widely.
Ta Quang Ky, the village head, said: "The younger generation today still pursues incense making. They are clever and are improving the craft. In the past, all steps were done manually. Now young people use machines which have boosted daily productivity to 10 times as much as manual production. Young people are more creative and clear-sighted so they have more clients."
In recent years, Cao Thon has become a tourist destination on popular tours of Hung Yen province. Khanh recalled: "Recently a group of British tourists visited the village. They visited several households involved in the trade, observed and even took part in the production. They said they found the village beautiful, the village roads clean, and the ancient pagoda and temple impressive. We hope to receive many more foreign tourists."