Featured festival in India
(+84) 946 02 6622 (Whatsapp/Viber/Zalo) | www.rawincense.com
1. Diwali festival
This is a traditional festival in India and also a major Hindu festival is taking place in 5 days to welcome a new year in the Hindu and also shows the power of justice, especially victory Lord Rama's heroic and Sita-wife before the bad guys. This festival takes place in mid-October or 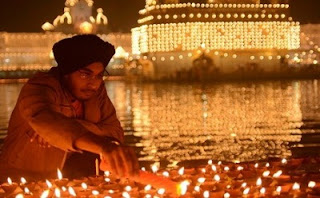 November in the year.

A man lit candles during Diwali festival of light
The main event was held on the third day of the festival. Clay lamps are lit Diyas represents the victory of justice. Its glow spread gives the festival a different name - "festival of lights". 4th day is New Year's Day and is also considered the best day to start the new job.

2. Holi festival
This colorful festival usually held every year on the occasion of mid-March, this is a unique festival in India's Hindu community. On the occasion of the traditional festival in India, the festival participants will throw colored powder or colored water on each other and throw. Whoever they get as much color as that year will have more luck. On that day, out in the street would not recognize anyone to anyone, because everyone faces and the colorful clothing, it takes a few days and then washed out colors on people. 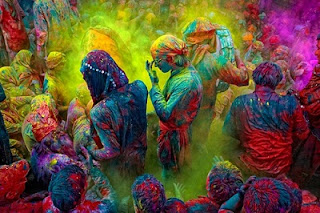 Festival participants throw colored powder on top of another brilliant

According to legend, the fire was lit in memory of the miraculous escape of Prahlad when Holika, sister of Hiranyakashipu, a demon so throwing him into the fire. As a loyal followers of Vishnu, worshiped with devotion and strong spirit, the flame of burning Holika had not been Prahlad. Therefore, he had escaped without any injuries yet.

3. Ganesha festival
Ganesha festival in India festival is taking place from mid-August to mid-September each year. This is one of the most important festivals of the Hindus in India, celebrating the birth of the elephant-headed god Ganesh body. In Indian mythology, Ganesha is the son of Siva and Goddess Parvati. According to Hindu believers, the Ganesha is the god of wisdom, always bring good luck and happiness for man. So most beloved Ganesha Ganesha Indian Do.Tuong be held processions everywhere from the countryside to urban areas. On the last day of the festival, Ganesh idols are placed in the car, the procession through the city before being released into a river, lake, sea. The festival takes place every year and attract tourists to visit the tourist attractions of India and participated in this festival. 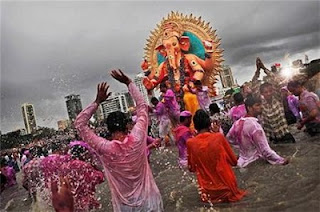 4. Ugadi festival in Hyderabad
This is a small festival of people in Tarnaka, the state capital of Andra Pradesh. The festival is unique in the Indian participants will disguise the gods, wearing garlands, the arms and dance, every dance are meant to scare away evil and welcome good luck for the citizen. 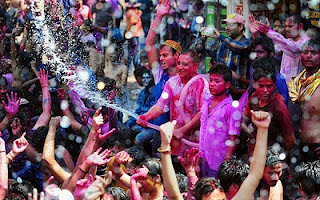 Ugadi festival in Hyderabad
In addition to the water festival in India above, visitors can also admire many other unique carnival, too. According to the Indian travel experience festivals throughout the year, any time you can also arrange trips to correct the festive season in India. Now imagine instead of sitting home, why not at least once in a lifetime immersed in the bustling atmosphere of the water festival in India with India tour cheap. Surely you will not regret your decision.