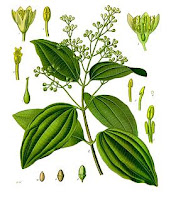 1. Plant characteristics and distribution
Wood trees, 10 - 20m high, smooth bark. The staggered leaves have short, long or slightly stalked stalks, with 3 arched tendons. White flowers, which grow into clusters in the leaves or the ends of the branches. Egg-shaped nodules, when ripe, have a smooth purple color. The whole tree has the aroma of cinnamon. Much grown in northern provinces in Vietnam.

2. Growing cinnamon  and exploitation
Particles split seeds. Sowing seeds in culture, when young people are strong at 0.6 - 0.7m, they are poor. After 10 years,
in year maybe exploitation 2 times.
The first:  Apr-May
The second: Sep-Oct
In Vietnam in the years 1935-1939 exported 1000 - 1,500 tons of cinnamon bark. Currently the statistics are not yet available but the amount of cinnamon bark exported can reach thousands of tons and the amount of essential oil can be several tens of tons. 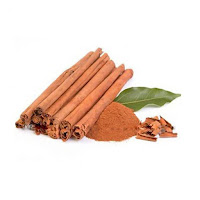 Cinnamon bark:
- Essential oils 1-3%, can reach 6% (Quang Nam Cinnamon), DĐVN III is regulated not less than 1%.
- Diterpenoid compounds (cinnacassiol), phenylglycosides, mucus, flavonoid compounds, tannins and coumarin.
Cinnamon essential oil, product name Cassia oil, is colorless liquid to yellowish brown, fragrant, sweet after hot spicy, d20: 1,040 - 1,072, nD20: 1,590 - 1,610, D20: - 10 to + 10. The main part of cinnamon bark essential oil is cinnamic aldehyd (70-95%). VNVN III regulates not less than 85%. There are also cinnamylacetat - substances that reduce the value of cinnamon essential oil, cinamylalcol and coumarin.
Leaves:
- Essential oil: 0.14 - 1.04%. Analysis of Yen Bai cinnamon leaf oil by resonant spectroscopy from carbon-13 nucleus identified 5 components: Banzaldehyd, bazylacetate, cinnamic aldehyd, cinnamylacetat and coumarin. Cinnamic aldehyd content fluctuates in 12 months in the year from 34.65 to 95.55%. The lowest is in June and the following months (July, August, September: 57.74%, 69.16%, 82.43%). In contrast, cinnamylacetat content was highest in June (57.933%) and remained significant during the summer months. From October until mid-May 5 cinnamic aldehyd content in leaves always reaches over 80%. So if exploiting the shell oil in combination with the leaves should be exploited before May and after September.

- Cinnamon is a precious medicinal herbs used both in Western medicine and Oriental medicine. Cinnamon has the effect of stimulating digestion, respiratory and circulatory support, increasing excretion, vasoconstriction, increasing intestinal motility and uterine contraction. According to new studies, cinnamon also has anti-tumor effects, anti-coronary atherosclerosis, anti-oxidation. In Western medicine used in the form of tincture, medicinal alcohol, liqueur.
- Cinnamon also used a lot to make spices. On the one hand, the taste of cinnamon stimulates eating, stimulates digestion, on the other hand, because cinnamon has the effect of inhibiting the growth of mushrooms, protecting food from rotten. At a concentration of 1% cinnamon powder has the effect of inhibiting the growth of Aspergilus flavus and concentration of 0.25 - 0.5% inhibiting the formation of aflatoxin.
Oriental medicine places cinnamon in tonic. Characteristics: Sweet spicy, great heat. Effects on all 5 sutras: Mind, waste, kidney, can, spleen. Has the effect of being a fire-fighting subject, clearing arteries except for welding. Used to rehabilitate the positive and negative effects of the fire, the organ is cold, poor digestion, abdominal pain.
In Eastern medicine, he used cinnamon to treat colds without sweating, low numbness, and painful limbs.
Cinnamon essential oil has antiseptic effect, stimulates digestion, stimulates the nervous system to ease breathing and circulation, stimulates intestinal motility, is used in combination with other drugs in the form of alcohol, alcohol sweet and ruby oil.